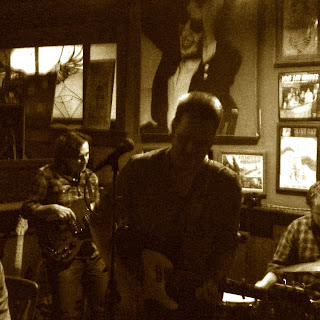 Weeks ago, I saw that Hiss Golden Messenger was scheduled to perform on November 10th at the small Santa Cruz venue, The Crepe Place. It seemed like it could be an ideal winter show: a spare acoustic performance by frontman M.C. Taylor whose songs have questioning lyrics that are ideal for this season when thoughts turn inward.
What I and the dozen others experienced at Hiss Golden Messenger’s performance was something far different but equally suited to the season: a bunch of crockpot country funk songs seasoned by a full band including the stellar Scott Hirsch on bass and a ripping Phil Cook on guitar and organ. The set was surprisingly hearty and sustaining like a good stew or chili.
At times, the band had shades of J.J. Cale’s sly guitar grooves. Near the end of their set, the group did a version of Waylon Jenning’s superb country classic “Lonesome, On’ry and Mean” in their unique style. The show ended with the band getting in the crowd and playing their song “Drum” with Taylor instigating the crowd to sing the lines: “Take the good news/ And spirit it away.” It was a truly powerful and communal experience. 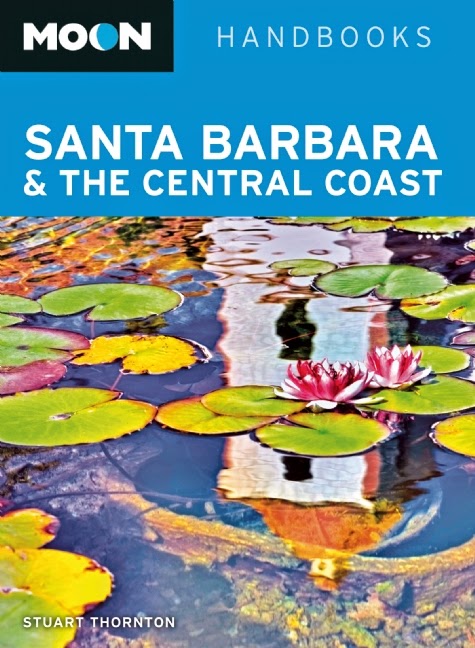 Behind the Scenes of Moon Santa Barbara & The Central Coast

Posted by Stuart Thornton at 10:11 AM No comments: 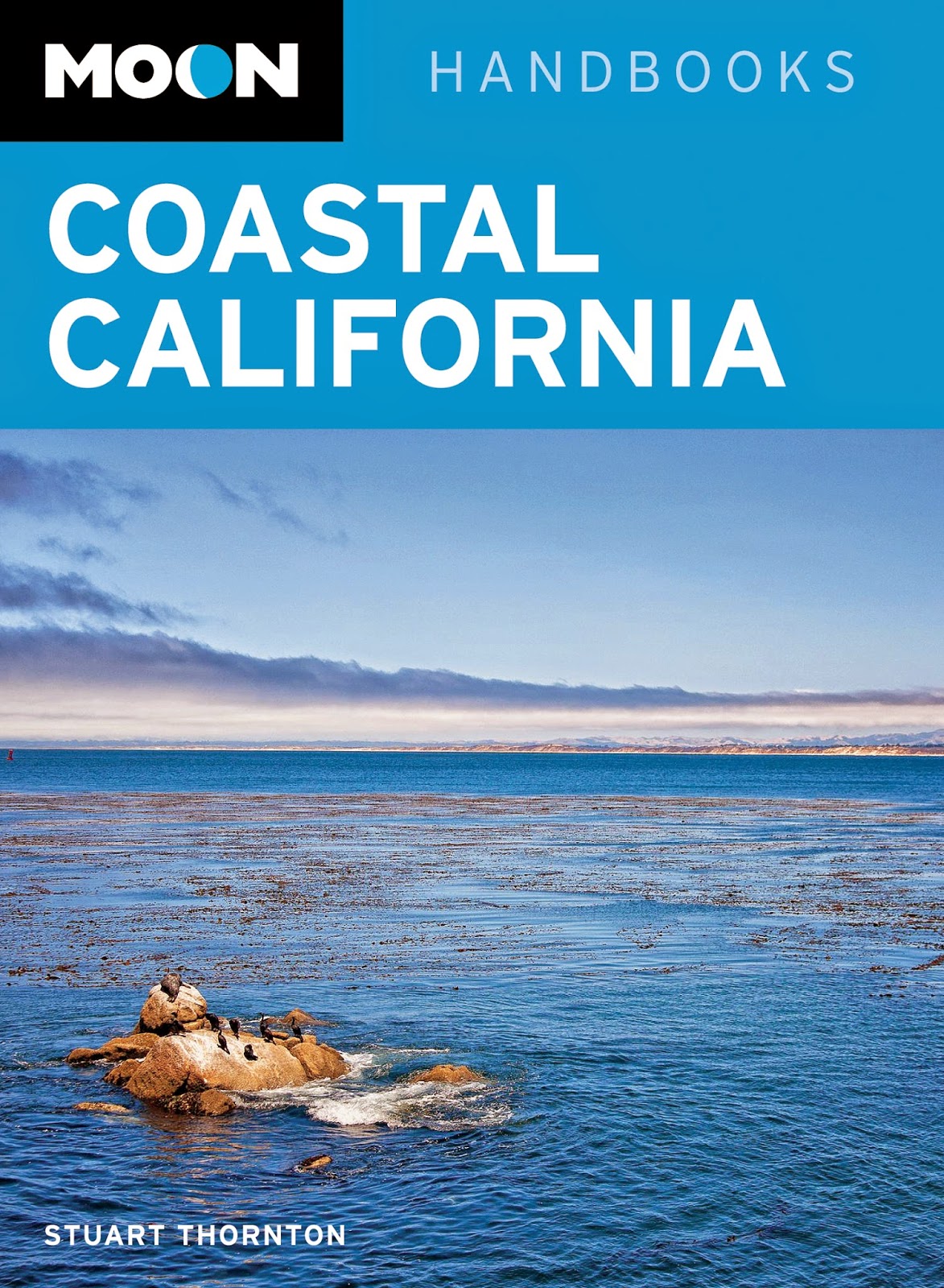 Behind the Scenes of Moon Coastal California

While researching and writing Moon Coastal California, I explored all 900 miles of the California coast from San Diego to Crescent City. A lot happened during those months on the road that informed the write-ups within the book. The book covers such a large area that memorable experiences have sometimes been distilled into just a sentence or two. For instance, the book's entry on The Lost Coast's Usal Beach (pages 301 and 302) is just two paragraphs long, but a lot happened during that evening when my friend Shane and I visited there.
Reached via a mountainous dirt road, Usal Beach is located in the Lost Coast's Sinkyone Wilderness State Park. The remote expanse of dark sand was everything a Northern California beach should be. Looking back towards land, the bluffs rose like giant sleeping animals, and the massive trees bristled above them. Pelicans dropped into the ocean like large stones.
Inland from the beach, there are 35 primitive campsites. Shane and I chose one and set up our tents for the evening. After listening to a superb North Coast pirate radio station by our campfire, we called it a night and went to sleep in our respective tents.

Fzzzow. Fzzzooooow. Ffffzzooooooowwwww. I woke up to the the sound of gunshots near our campsite. Outside the full moon seemed to shine down on my tent like a spotlight.


What time is it, I thought reaching for my cell phone.


In the distance, I could hear Shane snoring in his tent. Then ffffzzzzzzoooooooowwww. I grew up around hunting and guns, but this shot sounded cold, metallic, evil. It also sounded like the shooter was coming closer. I sat up in my tent, and I felt as alone as I’d ever felt in my life.


Fffffffffzzzzzzooooooowwwww. Shane suddenly stopped snoring. “Did you hear that,” I whispered to him. Even if I’d drunk a whole pot of coffee, I wouldn’t feel this awake.


We both lay still in our tents. I began thinking about why someone would be firing a gun this late. It could be drunken rednecks, but there was no drunken shouts or laughing. No loud country music or Skynyrd blaring. Maybe the shooter was trying to scare off a bear or an elk?  But only a shot or two would probably be needed to do that.


Ffffzzzoooooowww. Another shot. I started thinking of survival. In the tent, I felt as helpless as a fish caught in a net. Someone could just walk up and blast the tent with bullets and that would be it. I thought of getting into my car, but then I realized a shooter would look there after the finding the tent empty.


My mind was telling me I should drag my sleeping bag into the woods.  I could sleep there without being as paranoid. If we were hearing the sounds of a madman, he’d check the tent and cars first.


“Want to meet outside,” Shane called out.


I scrambled outside my tent and soon Shane and I were standing out in the moonlight. Though we were in the open, it felt good to have someone around.


“What if it is someone walking around popping campers,” Shane said echoing what I was thinking.


I shivered uncontrollably. It was not because of the cold outside.


“I did bring this for bears,” Shane said and slid the handle of a pistol out of the pocked of his hooded sweatshirt. It was somewhat reassuring but it didn’t vanquish all of my fear.


Around 50 feet away in the woods, a light appeared. Ffffzzzoooooowww. The light was gone right as the shot rang out. It was like it had been blasted out of existence. Farther away, a car alarm went off.


The task of packing up and driving out seemed pretty daunting. We were still not sure what was happening out there. Maybe the lateness of the night had simply caused our minds to wander to their darkest corners.


If there was a shooter, we’d definitely be vulnerable by packing up. Also, instead of fleeing from whoever it was, there was a possibility that we would drive right up to the individual on accident. Also the thought of driving the twisty mountain road back to the highway was very daunting in the dark.


“We are not going to be able to sleep here,” Shane reasoned. “It will be torture if we don’t get out of here.”


He was right. Even if our darkest thoughts were incorrect, a night in this isolated campground sounded like an awful prospect at this point.


A few seconds later, we were cramming our half taken down tents into our respective cars. I slid the cooler into the back of my vehicle, and Shane tossed our sleeping bags into his backseat.  I looked one last time at the glowing embers of the campfire, which looked like a giant highlighter had left its fluorescent mark on the land.


Shane drove out first, and I followed. We passed a lone, still raging campfire with a small tower of flame. In the trees beside the fire, a dark figure looked up at our late night procession. Both Shane and I quickly hit the gas to get out of the area as soon as possible.


Exiting the campground, our cars spiraled up and out of the beach area to the ridge above. It reminded me of the time I went skydiving, and the plane corkscrewed into the sky to get up high as fast as possible for the jump.


I sipped from a cold cup of coffee that was still in my car from the day before. I cranked up a mix CD so that I’d have some company. The taillights of Shane’s car were as reassuring as my childhood nightlight.


My mind wandered on the drive. What was going on in the campground below us? A shoot-out between rival pot farmers? A domestic disturbance turned ugly? Luckily, my body kept driving, and my car seemed to magically follow Shane’s taillights like a bullet whizzing toward the red light created by a rifle’s laser scope.


As I reached the bottom of the mountain and turned onto the paved road below, Usal Beach felt like a half remembered nightmare. Later, while fact checking my entry about Sinkyone Wilderness State Park, a state park ranger told me that locals would often camp out and spend their evenings there blasting their guns into the night sky. That information informed the last sentence of my Usal Beach write-up in Moon Coastal California.

Posted by Stuart Thornton at 3:57 PM No comments: 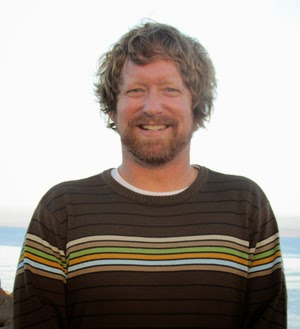 Hello there, Welcome to my blog! I should have created one of these things a while ago to write about what I love including traveling, music, the outdoors, water recreation, and more. First, here’s a little about me. I grew up in the fine state of Virginia surrounded by history, rivers, and friendly folks. After securing a bachelor’s degree in English from University of Mary Washington, I spent years exploring the Western U.S. before moving to the wild Big Sur coast of California. During my time in the Golden State, I have worked at the Big Sur Ranger Station and been a staff writer for the Monterey County Weekly. I have also contributed article to National Geographic Education, Via Magazine, Relix Magazine, East Bay Express, and more. My current passion is authoring guidebooks for Moon Travel Guides. The past few years, I have traveled all over California to discover the best attractions, restaurants, hotels, campgrounds, hiking trails, and more for Moon Coastal California, Moon Santa Barbara & The Central Coast, Moon Spotlight Cambria and San Simeon, and Moon California Road Trip. On this blog, I will be writing about my projects, travel experiences, life experiences, the latest in arts and entertainment along with anything else that pops into my head! Be sure to visit my website www.stuartthornton.com for more information about my books, articles, and events.

Posted by Stuart Thornton at 5:55 PM No comments: