Best Shows of 2015
An unexpected situation caused me to miss a handful of shows including Chicago's Riot Fest, where I had hoped to see sets by Iggy Pop, Motorhead, and Ice Cube among others. That said, I still saw a bunch of great performances, mostly in California. Here's a handful that stuck out.

Tweedy at Santa Cruz's Cocoanut Grove on March 19th
This night was hard to beat. There was amazing songs, humorous stage banter, and real tension when Jeff Tweedy stopped the show to kick out a guy who kept taking photos of the band after a few warnings. The night started promisingly enough with an opening set by The Minus 5 featuring R.E.M.'s Peter Buck on guitar. The next portion of the evening featured songs of Sukierae performed by Tweedy and his son Spencer and their band. The band took songs including "High as Hello" to unexpected heights. Then the group departed leaving just Jeff Tweedy onstage to do solo versions of Wilco, Golden Smog, and Uncle Tupelo songs. A real surprise came when he pulled off a hair-raising take of "Remember the Mountain Bed" from Wilco's collaboration with Billy Bragg on 2000's Mermaid Avenue Vol. II. Amazing. His fast strumming version  of Uncle Tupelo's "Gun" was stellar also. The encore set with the full band was spiked with superb covers including John Lennon's "God," Neil Young's "The Losing End," and Doug Sahm's "Give Back the Key to My Heart," which Uncle Tupelo covered on their last album Anodyne. The night wrapped up with Peter Buck and Scott McCaughey crowding the stage for a closing "California Stars." It is difficult to get any better than this.

The Replacements at San Francisco's The Masonic on April 13th
The Replacements have all those qualities I love in a band. How the hell was I just a casual listener until about five years ago? While this year's reunion tour included just Paul Westerberg and Tommy Stinson, the band delivered big at this show with sloppy exuberance, a few sublime songs, and some seriously off-kilter moments. The show began with rowdy oldies including "Takin' a Ride" and "Treatment Bound." At one point, Westerberg decamped to the interior of a tent set up onstage and delivered some freestyle vocals over the band's jazzy noodlings. The first encore found Westerberg alone with an acoustic guitar doing "Skyway." Then the band came out to join him for "Left of the Dial" and "Alex Chilton" to end the night. To hear those three songs in a row live is incomparable.

Drive-By Truckers at Monterey's Golden State Theatre on April 24th
The Drive-By Truckers stop in Monterey was on their "The Dirt Underneath Tour," which is essentially a mostly acoustic showcase of Patterson Hood and Mike Cooley's songwriting skills. The two delivered the songs and the stories behind the songs. One true standout was "Road Cases" and their explanation for the song. Hood described a Georgia band called Atlanta Rhythm Section that once was huge but then started hawking their equipment to local pawn shops to pay for their drug and sex habits. The song was inspired by Hood seeing road cases (or the gear that protects guitars and other instruments) in those stores stenciled with "ARS" and imagining one day when his band's gear is up for sale due to his own band's drug and alcohol problems. Quite an interesting backstory. The night ended with a terrific cover of the Faces' "Ooh La La."

Tinariwen at Santa Cruz's Kuumbwa Jazz Center on August 17th
Looking wildly exotic in their flowing robes and desert head scarves, Tinariwen transcend any cultural borders with a hypnotic blues rock sound that resonates with any real fans of guitar-based music. While I had seen them last year at an even better show in Big Sur, the group of Saharan Desert refugees impressed once again in this very intimate venue. The band members don't speak much English, but had a recurring bit where one of the guitarists would ask "is it OK?" after each stellar song. It was more than OK.

Ride at Santa Cruz's The Catalyst on November 14th
Reunited British band Ride played The Catalyst just one night after terrorist attacks roiled Paris including one on a Paris music venue where Eagles of Death Metal were performing. In response, the quartet walked onstage in Santa Cruz with the colors of the French flag projected on a screen behind them. Singer/guitarist Mark Gardener then looked back at the flag and announced that "we'll do it harder in response to that shit." They delivered fully with a set that featured impressive solos from guitarist Andy Bell, boundless energy from Gardener, and superb singing by the frontmen that allowed the vocals to float above the band's supremely loud two guitar attack. Many reunited groups tend to phone in performances, but Ride, and Gardener, in particular, were truly fired up for the show, remarking about the greatness of the crowd, the venue, and the band's year in general. The set was split mostly between songs from 1990's Nowhere and 1992's Going Blank Again. It ended with a stellar sounding take of early single "Chelsea Girl" that was quickly paced and spiked with sections of Sonic Youth style noise sludge.

Ex Hex and Mac McCaughan & The Non Believers at Richmond's Strange Matter on December 9th
You know that it is going to be a good night of music when the opening act could be a headliner. Mac McCaughan (of indie legends Superchunk and founder of Merge Records) delivered a thrilling set of guitar-based indie rock with his backing band The Non Believers that included terrific songs like "Box Battery" and a superb cover of under-appreciated Richmond indie band Honor Role's "Southern Girls." (I am gonna have to find a record by them some day.) Ex Hex followed it up with a raucous and rocking set featuring many moments of instrumental interplay between vocalist/guitarist Mary Timony and bassist Betsy Wright. Maybe I am biased because this show was in my hometown, but it felt special.


Posted by Stuart Thornton at 8:58 AM No comments: 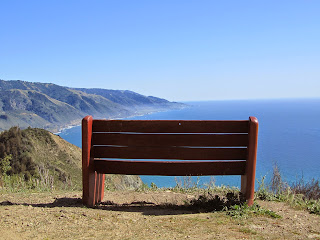 Most people drive through Big Sur’s stunning South Coast with no knowledge that a group of Roman Catholic monks reside in a unique community two miles above Highway 1. Even less folks know that members of the general public can stay at the New Camaldoli Hermitage and experience what the monks refer to as “the precious gift of time for a contemplative life.”
While researching the Moon Monterey & Carmel Guidebook, I had the distinct pleasure of spending an evening at the hermitage and experiencing a place that is a world apart from contemporary culture. There, your tethers to technology are abruptly cut. Wi-Fi signals are devoured by the Easter egg blue sky, and the most transfixing screen around is the giant Pacific hanging down from the horizon.
I stayed in a private hermitage, which was essentially a trailer with a view that a Silicon Valley type would sell a start-up to own. It had basic amenities including a bed, a restroom, a desk, a fridge, and a stovetop. This being a retreat run by devout Roman Catholics, the trailer was “decorated” with a crucifix over the bed, rosary beads, and other religious items that may make some uneasy.
More relateable for a guest who hadn’t been to a church service in over a decade was a framed quotation on one wall that basically summed up why 17 men were living up here in solitude. It was a framed copy of St. Romuald’s Rule that said in part: “Sit in your cell as in paradise. Put the whole world behind you and forget it. Watch your thoughts like a good fishermen watching for fish.”
With the absence of cell phone signals and laptop update chimes, thoughts emerged from the silence like sleek, meaty creatures from the deep. Sitting at a strategically placed bench with a sweeping South Coast view, I looked up and saw a sky freckled with stars. In the distance, the Piedras Blancas Lighthouse waved a wand of light over the land and sea that washed away the stars for a few seconds.
There, humanity and civilization seemed truly dwarfed by nature. The few lights strung haphazardly along the Big Sur Coast were pale reflections of the pinpoint power of the stars above. The highway below was a faint band on the mountains that seemed as transitory as a high tide line or a ring of detritus in a drained bathtub.
I had been describing Big Sur with words for almost two decades, and I had begun to repeat myself like an old blues musician. Suddenly, I was flush with fresh imagery and ideas. Old thoughts and attitudes were thrown out like dirty bathwater.
To use modern jargon, the New Camaldoli Hermitage is a great place to reboot.
New Camaldoli Hermitage is located at 62475 CA-1, a half mile south of Lucia in Big Sur. 831/667-2456, www.contemplation, Overnight stays $105-250
Posted by Stuart Thornton at 5:10 PM No comments: